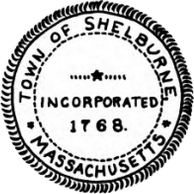 Shelburne was first settled in 1756 as part of Deerfield, Massachusetts known then as the "Deerfield Northwest." It was initially organized as the district of Shelburne in 1768 (named in honor of William Petty, 2nd Earl of Shelburne) and was officially incorporated as a town in 1775.

Therefore, Shelburne will be celebrating its 250th anniversary in 2018!

Do you want to help?

The Shelburne Board of Selectmen is seeking the assistance of a committee to help plan for Shelburneâ€™s 250th anniversary 2018. Interested residents should contact Town Administrator, Terry Narkewicz at Townadmin@townofshelburnema.gov or by calling 625-0300 ext. #1.

Help us make this a memorable event!